This beautiful mare moves with power and energy; she has produced 6 fantastic foals and she just delivered a spectacular filly by Light My Fire, a 2012 Chestnut Hanoverian Stallion – (Light On-Stakkato-Argentinus )

Avaia is by Celle stallion Alabaster, out of Eclipse, by Ehrentusch. Fantastic lines for dressage! Ally as we call her at home, is a solid 17HH mare with substance. She consistently passes along a super topline and powerful movement. 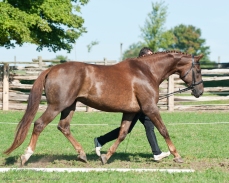 Her sire Alabaster is noted for his lovely type, from the Akzent blood. Damsire Ehrentusch competed to Grand Prix and is the sire of many notable competitors.

Progeny:  Photos and videos on each horse’s respective page.

2014 – Fenix Hanoverian gelding by Freestyle (Florestan) 16.3HH. Handsome and charming gelding with an easy-going nature and lovely gaits, he’s found his match and is loving life as a dressage prince.